Another School Year Ends – Lessons Learned & Why I Cried

In my own life over the most recent years, I’ve seen this at work several times.

My old, fake life had to come to an end before my new life – that I should have been living all along, I might add – could begin.

My time being tied to Jamaica had to come to an end before I could begin exploring the world.  And winter had to end so that the annual renewal of spring could begin.

Old apartments must be cleaned and closed up before new apartments can be moved into (well, when you live the type of nomadic life I do in this season of my life).

These are some of the endings and beginnings that have been cropping up for me.

The first was a change in my living situation.

I moved to a different apartment.  And it was an ironic move, at that.

A couple of foreign teachers ended their contracts early and left and I was asked to move from the flat where I had been living (since I arrived in Yakutsk almost ten months ago) to the flat that they were vacating.

The people who left were the Toxic Ones, which is why I say it was ironic.

I’m not going to lie, I wasn’t happy they were leaving but I also wasn’t sad to see them go.

I felt just as neutral about moving into their vacated flat.  I was told the reason why I was being asked to move and I had no problem acquiescing to the request.

After all, when accommodation is provided for me, it’s not my place to pick and choose where I live, as long as it’s clean and reasonably well maintained.

They left on Wednesday, May 9 – Victory Day, which could also be ironic, depending on how you look at it.

It was a holiday here so we all had the day off from school.

Since the next day, Thursday, was my day off, you would think I’d have waited until then to move.  I didn’t.

I had my most challenging class at 9 am on Friday and I didn’t want to spend Thursday moving, cleaning and settling into a new place; I needed to spend that day recovering from my moving activities so that I would be emotionally ready for my Friday morning class.

This is why they left early on Wednesday  morning and I moved late on Wednesday morning.  I actually only had to move across the street.

Two interns from school helped me.  After three trips and twenty minutes, we were done hauling my stuff.

The interns left to enjoy the rest of their holiday and I spent a couple of hours praying through every room, cleaning and unpacking.

To be fair, the place was already clean but I like to clean a place myself when I move in, no matter how clean it is.

I hadn’t seen the place before the key turned in the door to admit the interns and me.  It surprised me, actually.

It’s about twice the size of my previous flat and is meant for entertaining, which is why I plan to have the bridge club over next time we meet.  The new place is also more comfortable than my old place in several ways, like the fact that there’s a couch and wood floors on which I totally enjoy walking barefooted.

In fact, I’ve had to ensure that, while I enjoy living in it, I don’t get attached to the new place.  Actually, it’s revived dreams of the heart-home that I know is somewhere in my future.

In any case, that was the first ending and beginning that I had almost a month ago.  Some people ended their jobs to begin a new chapter of their lives and that caused me to end my time in my old flat and move into a new and better one.

The second ending for me was the end of the 2017/18 school year last Wednesday.

Over the course of the previous week, my kids did their final tests and last week was all about giving them their certificates of completion (or certificate of attendance for those who didn’t perform well throughout the school year), as well as their final report cards.

Between Monday and Wednesday, all of my kids’ classes wrapped up.  In those final classes, I had my kids make memory books of the school year, which was a great activity for them and for me.

It was great for them because it caused them to reflect on some of the things that they learned at our school over the previous several months; to use the language that we’ve been practicing; and it kept them busy colouring and writing.

It was great for me because I didn’t have to do anything while they were colouring and writing, except monitor and help them a little.

My one adult class wrapped on Thursday, which is my day off so the other teacher with whom I shared the class closed off with that group, though I did pop over for the last several minutes of class to congratulate them and bid them farewell.

I also presented little treats to all of my students.  I got ice cream for all the children; also, those who made excellent effort and got good marks throughout the school year got little presents, like notebooks and chocolates.

For the adult class, my partner teacher had a wonderful idea of giving them custom-made fridge magnets, so that’s what we presented them with. 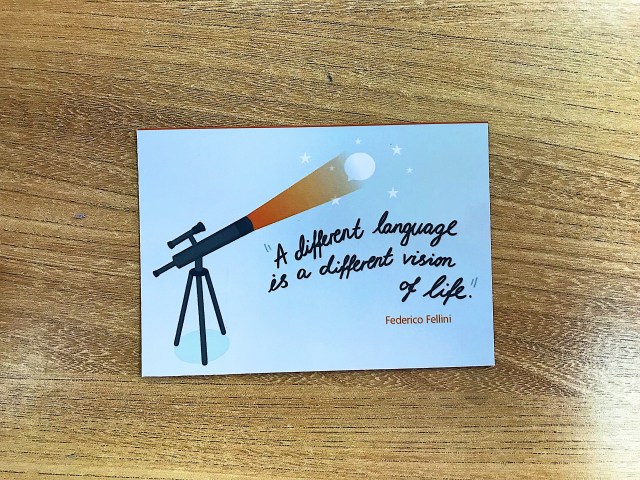 Cool, right?  This is the gift we gave our adult students

Three of my students also presented me with gifts – I got two boxes of chocolates and this brilliant rendering of me done by one of my twelve year old students. 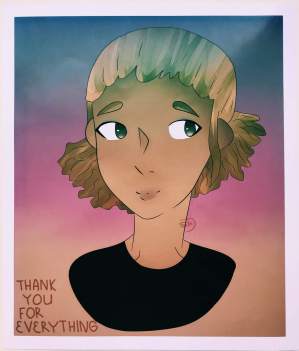 I was proud of almost all of my students.  I worked really hard this year, as hard as I ever worked in my corporate jobs, and it was gratifying to see that most of my students also worked hard and succeeded in my classes.

Of the more than seventy students that I ended the school year with, only about five didn’t do well enough for me to recommend them to move up to the next level of English language classes.

To me, that’s a pretty good success rate, especially for my first real teaching job working in a real language school.

With the end of the old school year came the beginning of summer camp, which I’ll work through for several weeks before I adventure off on a real break.

Summer camp in our school goes in two-week cycles, with each batch of students coming for only two weeks before a new batch begins.  There again I see endings and beginnings.

Actually, I expected to cry through one of my final kids’ classes last week, because I really particularly enjoy some of my very little ones, but I didn’t cry at all.

It was my last Russian class of the school year last Wednesday afternoon that unexpectedly had me in tears.

That was the last thing that ended for me over the past few weeks.  I felt kind of silly but I couldn’t stop the tears from coming.

At first I didn’t even understand why I was crying but upon a little reflection, I realised that it was because this woman was a constant in my life twice a week for over eight months.

When all the other foreign teachers abandoned her classes, I was the only one who stuck with her and, in return, she stuck with me.

She came from her home in a village outside of the city twice a week just for me, which is saying something in below -40⁰C winter temperatures!  She worked hard to ensure that she gave me useful language skills that help me in my everyday life.

And she clearly prepared for all of our lessons.

Even though I didn’t study as I should have, I always made sure that I did my homework, more out of respect for her hard work and effort than for my own benefit.  She was committed to me and I was committed to her. 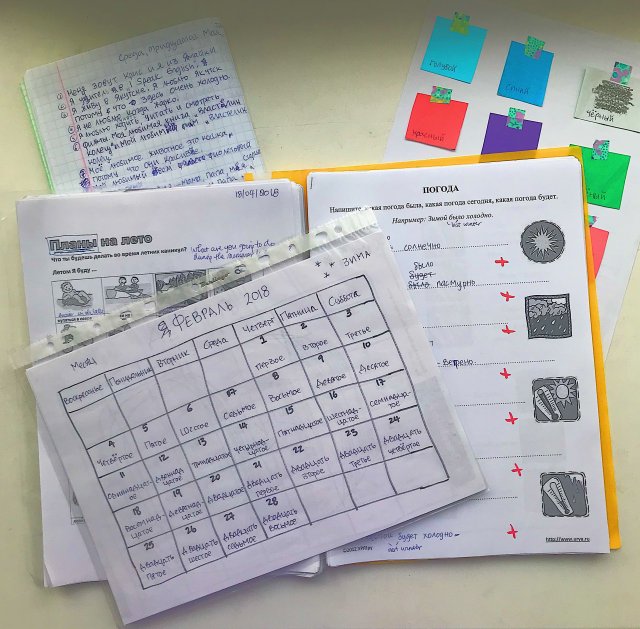 So I cried at the end of our last class when it finally hit me that I may not see her again.

If I have done anywhere close to the same for my students, I consider my school year a successful one.

Endings and beginnings.  They can be bittersweet but they’re necessary and inevitable in life.  I thank God for these recent endings that have made way for new things to take their place.

Do not say, “Why is it that the former days were better than these?”  For it is not from wisdom that you ask about this.  Ecclesiastes 7:10