My luggage got left in Schiphol.  Again.  Seriously.  Sigh.

When I left Istanbul, I once again had a brief transit stop in Amsterdam.  This time, I unhesitatingly asked the gate agent if my bags were properly transferred and she said yes.  She lied; only one showed up in Toronto with me eight hours later.  I didn’t let this phase me because I was about to see one of my favourite people in the world.

My Canadian friend and I have been friends for about thirteen years now.  In fact, she used to be my boss.  Best boss I ever had, even to this day.  I can say unequivocally that she is the reason why I rose as high as I did in corporate Jamaica because she pushed and challenged and grew me in ways that no other boss ever has.  She’s been a wonderful friend through the years.  We’re gonna call her Canada for the purposes of this blog.

Canada picked me up from the airport in Toronto just after noon on July 25, 2015 and we were off and running.  She had a week and a half of activities planned for us and we were both excited to get started.  We kicked it off with a visit to church that same afternoon for Saturday mass.  As much as I attended a Catholic high school for seven years, this was my first time attending mass inside a Catholic church.  This was what I would flash back to a year later when The Jamaican took me to Gereja Santa Theresia in Jakarta – my memories of going to mass with Canada.

That night I slept in the second best bed I’ve ever slept in – the bed in Canada’s guest room.  It gave my bed in Istanbul a serious run for its money.  The sheets, the comforter, the mattress – the entirety of the bedding experience was top class.  Top class, I tell you!

The next day, we went skydiving. 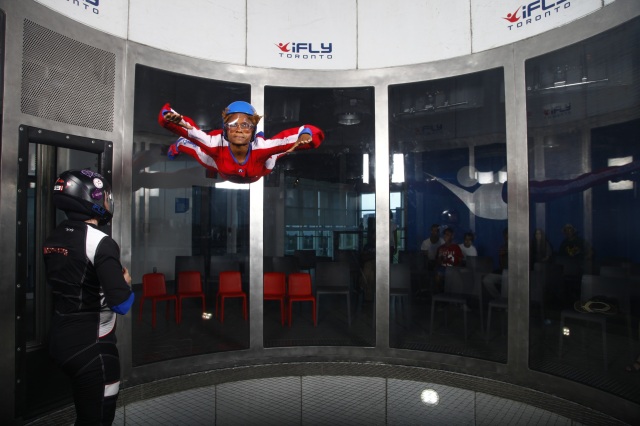 Ha!  You thought I was kidding!

It was indoor skydiving, but still.  It was fuuuuuuuunnnn!!!  We sucked so bad at it!  And it was absolutely wonderful.  Hey, don’t judge; it’s way harder than it looks.  You think you just float in the air but it’s not that easy.  And you have to keep your mouth closed otherwise all that wind blowing your lips back makes you look like a cartoon character.

The next day, we went to Ripley’s Aquarium, where we oooohhh’d and aaaahhh’d over jellyfish and sharks and sea urchins.  Apparently, it’s only zoos that I have a problem with and aquariums are alright.  It seems that I’m biased towards land animals and don’t care as much about the captivity of sea creatures.  Hmmm.  Anyway!

Some of the sea creatures (also, me) at Ripley’s Canada

In the evening, we went home and did facials.  To be accurate, Canada did facials on me and her nephew.  Oh, did I mention that she’s a natural nurturer so pampering is her gift and she exercises it frequently and generously? 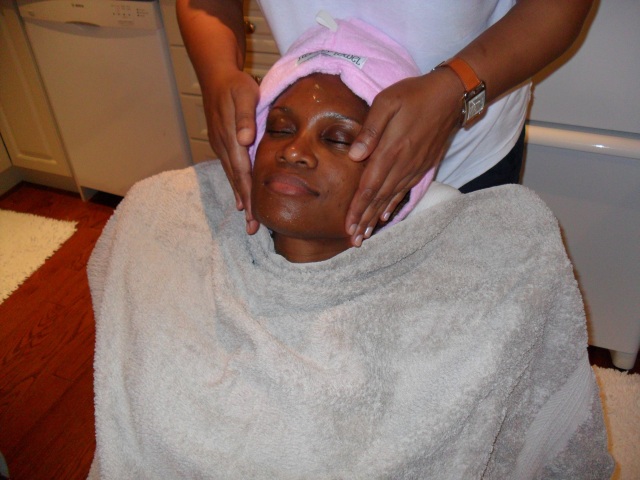 It was that night that my one missing bag found me again.  And just in time, too, because the next day, we were off to Niagara Falls – the good side, not the American side (wink wink, nudge nudge to the Canadians in the audience…tee hee) – which was a few hours drive away.  We spent the afternoon walking around town and admiring the falls, and the night walking around a different part of town and visiting a wax museum.

Dinner and a good night’s sleep then it was our turn to brave the falls first thing next morning.  We got aboard the Hornblower boat that awaited us, and after about thirty minutes navigating the very long line (even at that early hour) we were finally aboard and heading to the falls.  It was all over in less than thirty minutes but it was thirty thrilling minutes – the bobbing of the boat through the rough water, the refreshing spray of the water on our faces (we were wearing ponchos to keep our clothes dry), the power of the water roaring over the falls, the beauty of the scene before us. 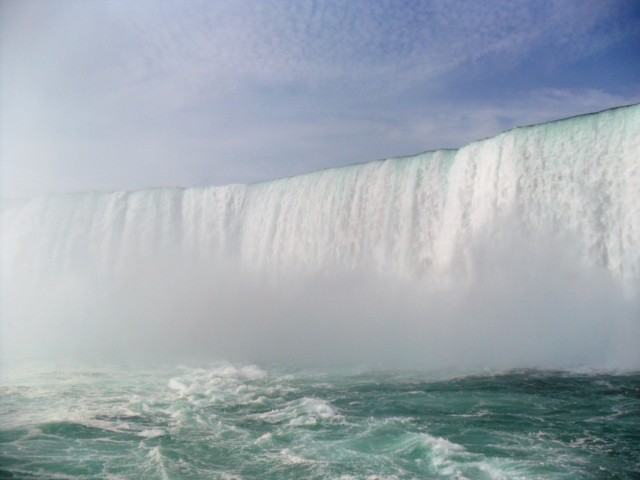 The falls up close

Beaver tail…this one with Nutella and bananas

Afterwards, we went to breakfast at my favourite place (you should know by now that’s IHOP) then it was time to head back to Toronto.  On the way out of town, we stopped for Canada’s nephew to buy a beaver tail.  I was full from breakfast (cause IHOP don’t play with portion sizes) so I didn’t want to get my own beaver tail, and I told nephew that I’d try a piece of his.  For those of you who don’t know (like I didn’t), a beaver tail is a Canadian treat.  It’s a large piece of fried dough and you can get it topped with different things, much like you can get different toppings on your ice cream.  I’m always down with fried dough (or dough in any other form) but when Canada’s nephew bought a Nutella and banana beaver tail, I said, “No, thank you,” seeing as I’m not a fan of Nutella or of bananas with bread (A thinks I can be converted; I’m not so sure).

We spent the next couple of days doing domestic things and working – me downloading and organising my numerous pictures, Canada going to her actual job – then we hit the streets again.  We went to a baseball game; the Toronto Blue Jays were playing the Kansas City Royals.  Spoiler alert: our side lost.  But we still had fun cheering.  Plus, we ended up on the big screen!  We sure did!  We took a selfie, I tweeted it using the team’s hashtag and presto, we were on the big screen at a major league baseball game. 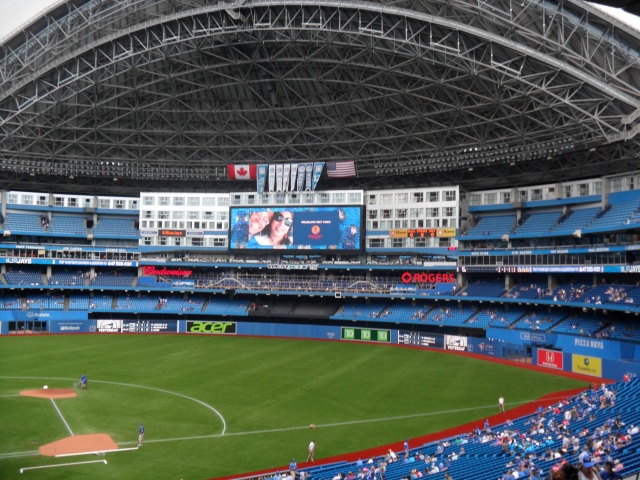 That’s us on the big screen there in the middle

After the game, we went to the CN Tower, which is literally right next to the stadium, then we had sushi for dinner at a nearby restaurant.

The next day was our last one together before I moved on to my next destination, so we went drinking.  Ha! Relax, we actually went wine tasting at a winery back near Niagara.  We were supposed to have gone a few days earlier when we were in the area but the booking got messed up and we didn’t.  So we decided to make the drive back.  It was totally worth it – the conversation, the uninterrupted time together, the wine and the food all made it so.

And then it was over.  A week and a half was done, just like that.  A week and a half in which Canada showered me with love.  She loved on me so much!  Yes, we visited a lot of places together but, as much fun as we had, it wasn’t the going out that made my visit special.  It was her making me warm milk every night to help make sure I slept well.  It was her making sure I had a good time doing things she knew I’d enjoy.  It was the heart to heart talk on her deck one sunny morning over coffee (her) and hot chocolate (me, I still wasn’t a convert yet).  It was finally meeting her nephews, who I’d been hearing about for years.  It was being there for the purchase of her older nephew’s first car.  It was the moments when we were quiet together, just loving the fact that we were together.

That visit marked a new chapter in our relationship, somehow.  I think it grew deeper and even stronger than it already was; being in someone’s personal space 24/7 will do that.  At the end of that visit, I loved her even more than I did before.

My epic trip could have ended there and I would have been more than satisfied.  But there was still more to come.