I left Tanzania on an emotional and spiritual high.  My month there had been amazing beyond any expectations I could have had.  I boarded a KLM flight on the night of July 22, 2015 and spent the next nine and a half hours flying to Amsterdam, where I then spent four hours wandering around the airport (picked up some Dutch cheese for my friend in Toronto) before boarding my flight to Istanbul.  And that’s where my luggage and I got separated – at Schiphol airport in Amsterdam.

Back in those days (ya, way back two years ago) I had luggage anxiety.  I had sufferered from it for years.  From the moment I’d check my bags until the moment I’d claim them off the carousel, I’d have a low level anxiety niggling at the back of my brain, wondering if my bags and I would arrive at my destination together.  Well, my fear was finally realised.  As we were waiting to board, I remember having a strong feeling that I should go ask the gate agent to check that my bags had been transferred from my Dar es Salaam flight to my Istanbul flight but I thought, “Don’t be silly, this is big ole Amsterdam airport, for goodness sake.  Of course your suitcases are on the plane.”

They weren’t.  When we got to Istanbul almost three and a half hours later and I couldn’t find them on the carousel, I learned that they were very much still back at Schiphol.  I couldn’t help it; I laughed.  I laughed and shook my head and said, “OK, Holy Spirit, lesson learned.  When You tell me to do something, I’ll do it.  Good one, though.”

They said my bags would be delivered to my hotel by the next evening and I impressed on them that they had not a minute to lose since I’d be leaving Istanbul again in thirty-six hours.  I had my large tote (my trusty backpack and I hadn’t met yet) with my clothes and toiletries for the next couple of days so I was fine.  I hopped into a cab, determined to forget about the luggage and enjoy my very short time in a new city.

About eighteen hours after leaving Dar es Salaam…in the cab on the way to my hotel in Istanbul, luggage-less except for the 2 bags you see on the seat across from me

My hotel was gorgeous.  It was a little boutique hotel near Topkapi Palace that I had found online for a steal.  The pictures didn’t do it justice (even my pictures don’t do it justice), but let me tell you that it was in the bed in that little boutique hotel in Istanbul that my bed snobbery was born.  When I went to bed that night, after wandering around the neighbourhood for a little while, picking up a couple of souvenirs (and revelling in the fact that I was in Istanbul!!!), I felt like I was sinking into a cloud…a cloud that loved me above all other people who had ever lived or would ever live.  It was so blissfully comfy that I had to notice how awesome it was.  I had never in my life slept in such a comfortable bed.  Never!  I still haven’t found a bed to match it in comfort, though I’ve since slept in a couple that came close.  I’m not sure I moved all night and I would have slept on if the call to worship from a nearby mosque hadn’t woken me up the next morning.

I had booked a tour for the day and after a leisurely breakfast in my hotel’s dining area, my tour guide found and united me with the rest of our small group and we were off.  Our first stop was Sultan Ahmet Square, formerly the Hippodrome of Constantinople (which is what Istanbul used to be called).  I’m chuckling just writing that because I was delighted to be in such an ancient place, no matter how modern it felt. 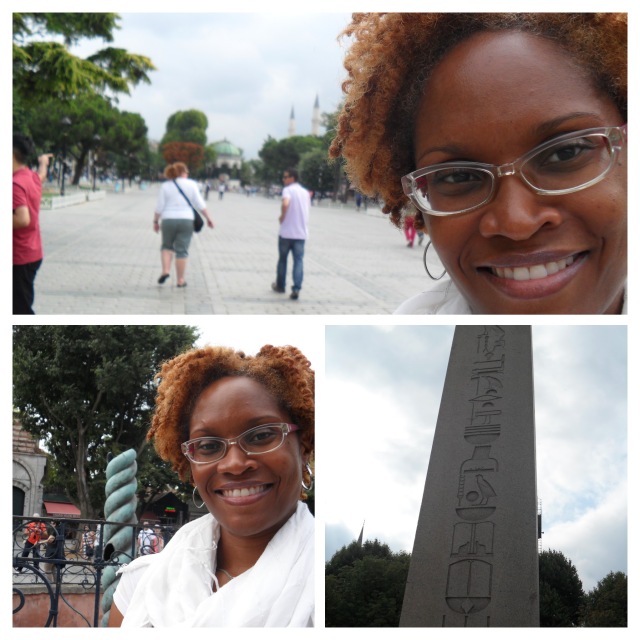 At top, that’s the Hippodrome behind me, paved over now and full of tourists. Bottom left is the Serpentine Column behind me, which looks green but is actually made of bronze…oh, and it’s over 2000 years old.  Bottom right is the Obelisk of Theodosius, which is over 3500 years old

From there, we strolled over to Ayasofya, which is a church turned mosque turned museum.  It’s a truly beautiful building that is steeped in history.  There are beautiful religious reliefs on the walls from when the building was a church, and the stonework is amazing.

Then we were off to a Turkish rug market (I cracked and bought a small one…I couldn’t help it, they were gorgeous!  Also, the quality!  And how do you go to Turkey and come back without a Turkish rug?) followed by a quick stroll through the Grand Bazaar then lunch at the train station where the Orient Express (uh huh, the same one) used to end its service in Constantinople.

Ha!  As a huge Hercule Poirot fan (HUGE), I was more than stoked to find myself here

Then we were off to a mosque, actually the first mosque that I would ever enter (Ayasofya didn’t count since it’s a museum and is no longer a place of worship).  We took our shoes off and the women in our group covered our heads with the scarves we had brought for that very reason.  After a few minutes of walking around and learning a little about the mosque, we left and wandered about a bit in the nearby market, where I bought some Turkish delights.  My host back in Tanzania had introduced me to them because I actually had no clue that there was really such a thing.  For those who are ignorant like I was, Turkish delights are little treats that Turks usually have with their coffee, which they take black and unsweetened.

Finally, we went off to our last stop of the day – Topkapi Palace.  That’s where I saw Sailor Moon.

Seriously, I saw this kid and immediately thought, “Sailor Moon!  And her mom!”  I had to snap a pic

Topkapi Palace is a palace complex that used to be the residence of the sultans of the Ottoman Empire.  It overlooks the Bosphorous and has several exhibit areas.  We spent a good couple of hours there before our tour finally came to an end in the late afternoon.

Clockwise from top left: Entrance to the palace complex; entrance to one of the exhibit areas; relaxing in the warm afternoon with a bottle of Turkish water; column in the foreground was made in 1205

My hotel was just down the street from the palace so when our tour was over, I bid a fond farewell to the tour group and walked back there, where I hung out in the courtyard for the rest of the afternoon.  The day had been long but good.

Late that night, my luggage finally arrived.  In fact, my two suitcases were finally delivered just a couple of hours before I would leave for the airport.  I enjoyed my last night in the best bed ever made then was off to the airport at about 3:30 am the next day, headed for Canada for the first time in about twenty years.