On day 3 of my safari, we departed camp right after an early breakfast, as usual.  After the previous day spent crossing Ngorongoro and a small part of the vast Serengeti, encountering the presence of God and having my heart mended, I truly didn’t need anything else.  Still, we had two more days to go and I was bursting with eagerness by this point.  Any façade of coolness was loooooong gone.

The sun rose on Dearson and me as we tooled along in our safari van, and less than ten minutes down the path away from camp we rounded a corner and stumbled across a huge herd of buffalo.  By Dearson’s estimate, there were about three hundred of them.  We had seen none the day before so this was my first encounter with buffalo. 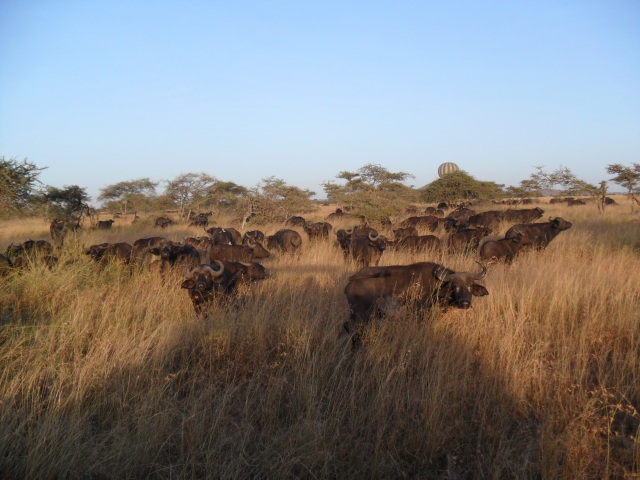 We were surrounded on all sides by the herd and yup, that’s a hot air balloon rising just behind the acacia trees in the right background…the scene could not have been more idyllic

I also saw my first herd of hippos (they didn’t seem hungry, hungry at all…ha!). 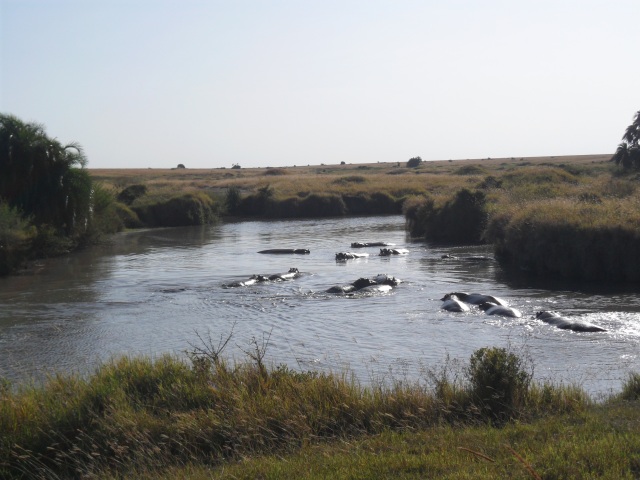 A herd of hippos in the water

I saw ducks and more hyena and lions before we left the Serengeti around mid-morning.  Dearson even managed to find two cheetah! 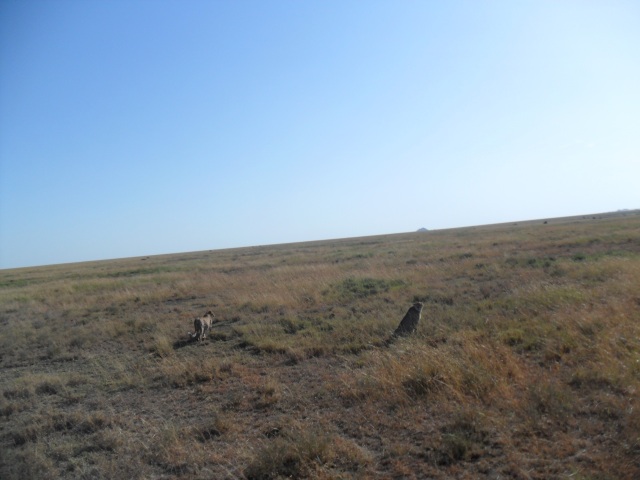 The closest we could get to the cheetah, and this is with Dearson chasing after them for a little while

Then it was time to leave the Serengeti and head back to Ngorongoro.  We had a collapsed volcano to explore.

Ngorongoro Crater is a caldera (the mountain is an ex-volcano that collapsed in on itself, forming the crater) that is home to lots of wildlife, especially during migration season.  It wasn’t migration season but we spent a good few hours that afternoon driving the entirety of the crater.  It was there that I finally saw a rhinoceros, through binoculars.  They’re antisocial, apparently, and we couldn’t get close enough for me to get even a bad photo.  Sorry!

But what a treasure trove of hippos!  We ate our usual packed lunch overlooking a small lake where a couple of herds of them were studiously ignoring the cautiously distant but enraptured tourists (we’re talking about wildlife here, we couldn’t get too close) and going about their business. 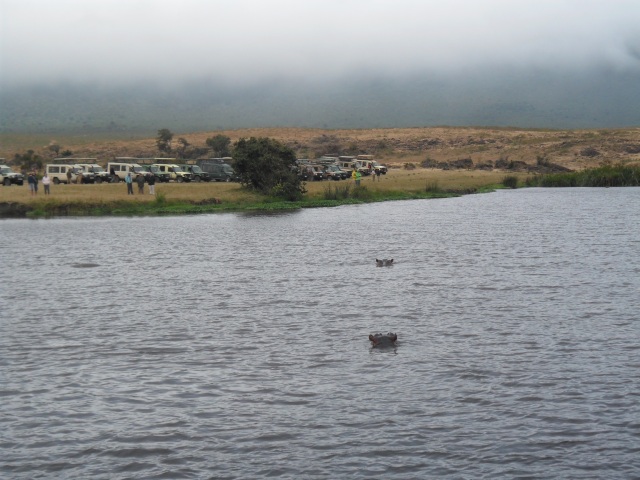 That’s two hippos’ heads you see in the water

There were zebras, elephants, gazelle and ostriches, and a lion or two made an appearance.  And it was cold in the crater!  As much as it felt like we were in a valley, we weren’t; we were actually atop a very high mountain (estimates put the original volcano at almost as high as Kilimanjaro) and the temperature made that abundantly clear.  I had to wrap a scarf around my neck and put on a sweater and a hoodie with the hood up over my head in order to keep my head and neck warm. 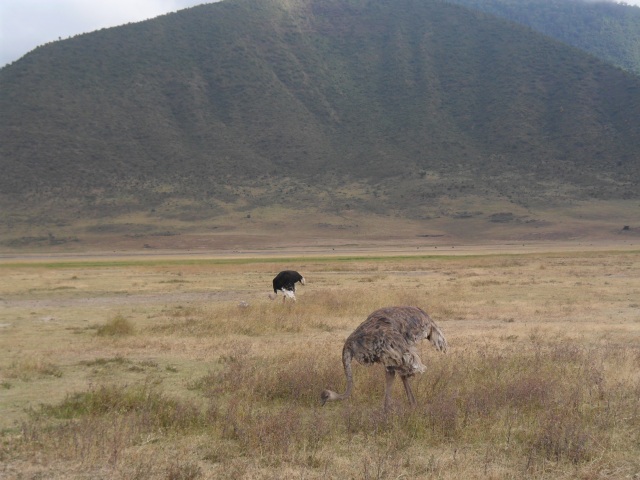 Ostriches grazing in the crater

Towards late afternoon, we headed out of the crater and towards our resting place for the last night of my safari. 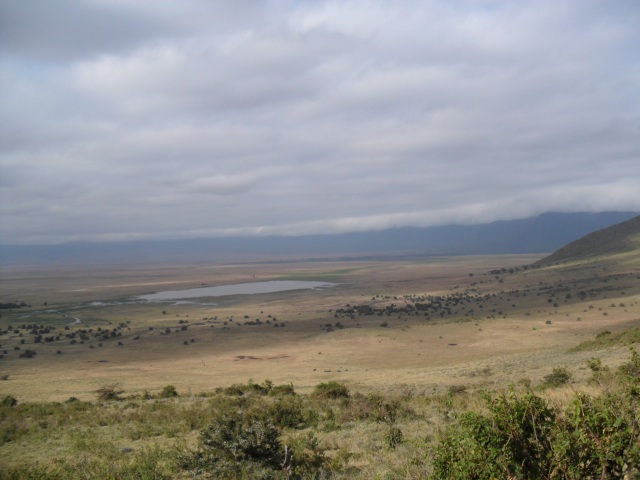 The view as we were exiting Ngorongoro Crater, surrounded on all sides by the walls of the caldera

We stayed at Rhino Lodge, right up there atop the mountain.  I was warned not to leave the door to my back porch open, to prevent wild animals from wandering into my room.  We had supper in the dining room; I was dressed in about four layers of clothes because it was really cold.  It was so cold, in fact, that they had to deliver wood for the stove in my room to keep me warm through the night.  I slept in my nightie and sweater, wrapped in the sheets with a heavy blanket pulled up over my head all night, with just my nose sticking out.

The next day, day 4, was the last day of my safari and would end back at Kili airport.  We got our usual early start after breakfast to ensure that I wouldn’t miss my early afternoon flight. 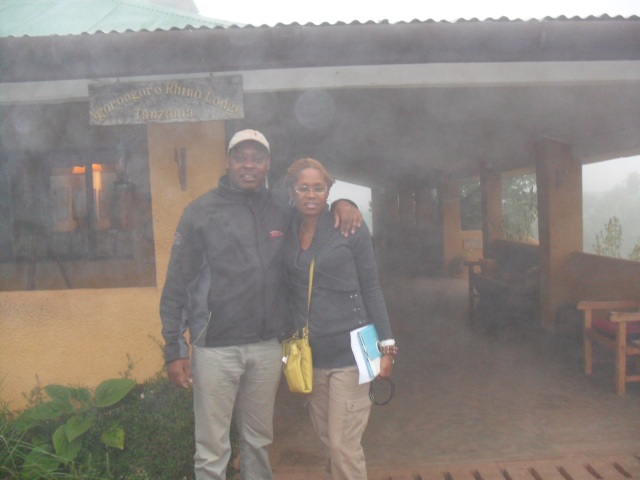 We checked out of the Ngorongoro gate.  We had checked in there only two days before but, because of my experiences over those two days, it felt like a lifetime had passed.  Back down the wall of the East African Rift we went, passing villages and towns, back through Arusha and to the airport.

When I got back to Dar es Salaam that night, I didn’t have the words to explain to my host what those four days had done to me, but I think she had an inkling since she had been on safari before.  I don’t think that you can come back from a safari the same as when you left; unless you have no heart, it’s just not possible.  Your perspective must change in some way.  For example, I don’t know how you can come back from a safari and still be OK with zoos.  I never had a problem with zoos before; however, after my brief but intense experience – unless it’s a sanctuary that’s rescuing and sheltering hurt or endangered animals – I’m totally against zoos and have no interest in visiting or supporting them in any way.  Animals weren’t meant to be locked up in cages for our entertainment and enjoyment.  They were meant to be in their natural habitats, doing whatever it is that they do.

I also don’t know how people can come back from a safari believing that there is no God.  If you go with an open heart, you can feel Him everywhere out there!  Unlike in cities and in our everyday lives when we tend to forget that He is omnipresent, you can’t escape His presence out in the wilderness.  Those four days unexpectedly changed me and deepened, yet again, my relationship with God and made me fall in love with Tanzania forever.

Now, I only had one more must-do on my list before I left the country.  I had to visit Zanzibar.