Into Every Life, A Little Rain Must Fall

It was Friday morning.  The air was still, the sun was shining and the heat was getting intense.  I had spent the morning sweating like a pig and complaining to my sister about how tired I am of being hot.  I had also spent the morning writing about how boring life has been for the last little while, because I haven’t really been anywhere and there have been no real conflicts or challenges in my life.  It was about an hour after I had finished writing that post and I was working on another when I decided that I was going to walk to our neighbourhood supermarket, which is only a 15-minute stroll away.

You haven’t heard me talk about the supermarket because I haven’t been there since A left back in May.  It’s not that great a supermarket so I don’t really have any reason to go there.  Plus everything I need is literally across the road at 7-Eleven, Indomaret or AlfaMart, and reasonably priced.  So why should I walk further away to go get stuff?

However, I’m really tired of my usual breakfast fare of oats topped by fruit and a peanut butter sandwich, and I was desperate for some new options.  In fact, I was so bored with my usual breakfast that I didn’t even have breakfast that morning, except for a giant cup of tea with honey and a sweet roll from 7-Eleven.  So although I knew not to have high expectations for the supermarket, I decided to go anyway because I could at least try.  And who knew?  Maybe they had added some interesting items since my last visit 5 months prior.

It was 11 am when I set off.  By this time, the sun had disappeared, the sky was overcast and there was a little breeze.  I’ve come to know Jakarta weather well enough to know that those conditions meant that rain could come at any minute or not at all.  I didn’t have an umbrella but I decided that I didn’t care; I would walk in the rain if I had to because I just needed some new food options!  My bout of the flu from the previous week was long past so I wasn’t worried about aggravating an illness.  “Plus,” I told myself as I strolled out of our complex and through the next, “it probably won’t even rain anyway.”

Ten minutes into my walk, I was on the main road and thinking of the things that I hoped I would find in the supermarket – maybe some non-sugary cereal or some non-sugary yogurt.  Was it too much to hope for some reasonably priced raisins?  Maybe, but I envisioned it anyway.

As I dreamed of breakfast possibilities, a bike pulled up beside me and I heard, “Hi, Kreeeeeeestin!”  It was 1 of the Go-Jek riders who has taken me here and there around Jakarta over the past few months.  He asked me where I was going and I told him I was walking to the supermarket.  Just as I smiled at him and turned to continue my walk, the heavens opened up and it began to rain.  He motioned for me to jump on the back of his bike so he could take me the rest of the way.  We arrived at the supermarket in about a minute and he (over) charged me 10,000 rupiah for his timely rescue of me from the downpour.  I didn’t mind paying (it’s less than a dollar) and I told him I would be inside for 20 or 30 minutes.  He said he would wait for me and I went in feeling happy and hopeful.

I was feeling happy because I love the rain.  Love it.  Love.  It.  Love it!  I love inclement weather, and despite the fact that I’m from the tropics (or maybe because of it), I can’t stand perpetual sunshine and heat.  Cannot.  I don’t like it.  It’s boring and it’s hot.  And I really dislike being hot.  Since I had spent the morning doing minimal physical activity but still sweating like a stuck pig, I was really happy that the rain was bringing some relief from the heat.  Plus, rain is just beautiful to my eyes.  I was also hopeful for my next breakfast.

I might as well have saved the hope.  I spent 30 minutes wandering the entire supermarket and it flopped once again, reinforcing as correct my decision to avoid it for 5 months.  All I got were some snacks and a new breakfast cereal to try out (the type where you add hot water and it turns into porridge).  Oh!  And I also got a piece of cheese because I was desperate for something to spice up my daily culinary life.  I don’t trust Indonesian cheese (and I was right not to) but, as I said, I was feeling hopeful.

Anyway, I finished up inside and went outside, where Go-Jek Guy was waiting for me under the overhang.  While I had been wandering the aisles in the supermarket, the rain had been thundering down and it hadn’t let up by the time I got back outside.  Go-Jek Guy and I decided not to wait, because I also know that a good Jakarta rain can last for hours.  So he gave me his passenger helmet, I put my wallet and phone in my plastic bag of groceries and tied it up, and we jumped on his bike for the 5 minute ride back to the centre. 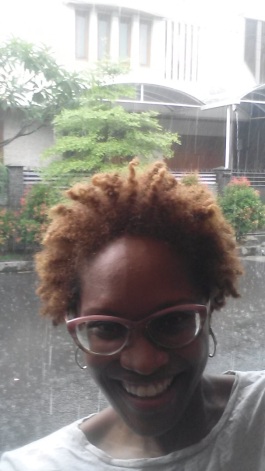 The minute we moved away from the overhang, I was doused in rain.  And I loved it!  As we rode away from the supermarket, I let out a loud, “Woo-hooo!” because I couldn’t help myself.  There was just something positively exhilarating about riding through a downpour, getting splashed by oncoming vehicles and not caring one bit!  I laughed out loud with joy the whole way back to the centre.  I just felt overflowing with it for those few minutes.

When Go-Jek Guy got me back to the centre, I hopped off his bike, still laughing like a child let out of school for the summer.  He (over) charged me 20,000 rupiah for the ride because he had gotten soaked on my behalf.  Again, I paid him without argument and started wringing out my dripping skirt and t-shirt.  I was soaked straight through to the skin.  Straight through.  Nothing at all that I was wearing on my body was dry, is what I’m telling you.  I was literally sopping wet.  Thankfully, the helmet had kept my head totally dry and the helmet visor had protected my face (and my glasses…clear vision the entire time).

I entered the house still laughing and just feeling so darn happy.  The cleaning/cooking lady laughed at me as I ran upstairs to have a quick shower and change into dry clothes.  Now I sit here writing this and it’s still raining 2 hours after it started, though not as hard as it was.  And I’m as happy as a cooled-off clam.