My second day in Bandung was actually my only full day in the city.  I woke up, did my devotions as usual, washed my hair (I was trying out a new ‘do) and got ready to go out.  There was a Starbucks a few steps from my hotel so I decided to get breakfast there.  I could have gotten breakfast at my hotel but I’m so tired of disappointing Indonesian hotel breakfasts, so I didn’t even try.

My plan for the day was to visit 4 places: the Museum of Asian-African Conference, the Museum Geologi, a tea house for lunch and Saung Angklung Udjo.  I didn’t want a very busy day, I wanted to take in a few of the must-see sights of Bandung but at a relaxed pace.

The Museum of Asian-African Conference is apparently a museum that is totally committed to the Asian-African Conference that was held in Bandung back in 1955.  A page on their website had a big picture of Malcolm X and a quote about that conference so I thought I’d check it out.  It really didn’t look that interesting but I thought I might as well, since Google maps told me that it wasn’t too far from my hotel and I could easily walk there.  So once I was done at Starbucks, I set off.  Then the walk seemed to be taking too long and it was starting to drizzle a bit so after 10 minutes I abandoned the idea of going there, hailed a cab and changed direction to the Museum Geologi.

This museum actually impressed me.  I’ve seen some really bad museums and I didn’t have high expectations, but I have to say, it wasn’t bad at all.  They had interesting displays and videos and some of the signs were in English so I could kind of know what I was supposed to be looking at.  I spent about 2 hours there then hung around for another 30 minutes or so, waiting for the rain to ease up.

It finally did and I set out to the tea house I had found online, which was supposed to be close to the museum.  Nobody seemed to know where it was, though, and when I consulted Google maps, it finally told me that it was closed.  Uuuuugggghhhh.  So I decided maybe I should check out the postal museum, which was close by.  But then I changed my mind because it was going to close within 30 minutes.  Finally, I just ordered up a cab and headed back to my hotel for lunch at a steakhouse near there.

I decided to give an Indonesian burger a second try.  The last time I had 1, there was an egg in it, as well as cucumbers.  Those things don’t belong in a burger, especially the egg.  It’s gross.  So I don’t eat burgers here – actually, I don’t eat Western food here.  But based on the description in the menu, I decided to give it a chance because I was craving some grilled beef.  It wasn’t great, but it wasn’t bad either.  I rounded off my meal with a banana split minus the banana – because ice cream doesn’t need bananas, people.

It looks normal…that’s how they usually get you.  But this 1 was fine

Once I was done eating, I jumped in another cab and headed off to Saung Angklung Udjo, which showcases the angklung, a bamboo instrument that originated in West Java.  My Bandung advisors back in Jakarta had recommended that I not miss this performance and I ended up being glad I saw it, though I didn’t start out that way.

When I just got there, I was not impressed.  They started with a puppet show accompanied by musicians on angklung and other instruments.  The puppet show was entirely in Indonesian so I had not a clue what was going on.  This was followed by dance performances by kids who seemed supremely uninterested in what they were doing.

Coming from Jamaica, I’m not used to such lackluster dance performances.  Dancing is usually done with energy, even if it’s slow, and dance performances even more so; eye contact is made with the audience; there’s expression on the face.  You know, the kind of thing that any well-trained performer knows, whether novice or professional and no matter how young.  Most of the kids in the angklung show didn’t look at the audience once and they kept talking to each other while they were dancing. 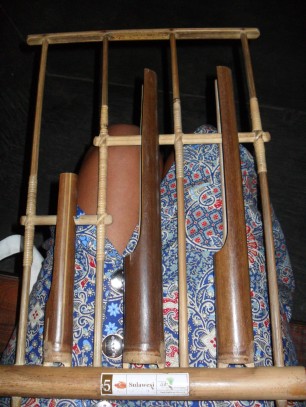 An angklung…don’t mind the little peek of leg

By this time, I was resigned to this being just a check-off on my list of things that I’ve done.  But then it got good.  They got to the audience participation part of things.  We each got an angklung – every one of the 150 or so people in the audience – and we were taught how to play it.  It was so easy and really fun.  Pretty soon, we were playing songs in harmony.  I admit I was a total dork and loved every single second of it.  And how they did it, using a series of hand gestures to let us know who should play when, was super cool.  You should go check out the show if you’re ever in Bandung; the audience participation part of the show is totally worth suffering through all that goes before it.  The afternoon wrapped up with a performance by an angklung orchestra.

When the show was over, I caught a cab back to my hotel, where I dropped my stuff and headed back to Starbucks to hang out, write and have a cup of tea.  By 9 pm, I was back in my room, where I showered, wrote a little more, then went to bed.

My day had been by no means exciting, but it was nice.  I visited a nice museum, I saw a nice show, I ate a not-gross burger, and what with all the hopping into and out of cabs, I saw a bit of the city.  So far, I was liking Bandung.

2 thoughts on “Relaxed in Bandung Part 2 – A Whole Day”