Having been in Banda Aceh for a few weeks now, I’ve formed a few second impressions that I think it’s time to share.  Notwithstanding the mini-rant of my last discourse on the Imigrasi debacle, I believe I’ve been objective in today’s post, since I had already started forming these impressions before part 2 of that drama got underway.

They’re bad.  No joke.  I’ve seen some really bad teeth here and only 1 set of really nice looking teeth – and that was the village chief’s (a.k.a., the neighbourhood watch captain).  He’s not on my list of favourite people so I really don’t want to like his teeth but I can’t deny that they’re pretty nice so I won’t be petty about it.  I’ll give him his dental props.

To be fair, it’s mostly the men’s teeth that are bad.  The women’s are generally OK (generally).  The men’s teeth are probably so bad because of the heavy smoking that many of them do.  I have never seen so much smoking outside of a party, as just a part of normal, everyday life.  I’m told that boys start smoking as young as 8 or 10 years old here.  I witnessed it for myself recently when I saw a boy who couldn’t be more than 13 years old smoking while he bussed a table at the restaurant at which we were dining.  Of course, a smoking woman is frowned upon.  Nothing to complain about there since this works out in the women’s dental favour (silly men…smoking is for idiots!). 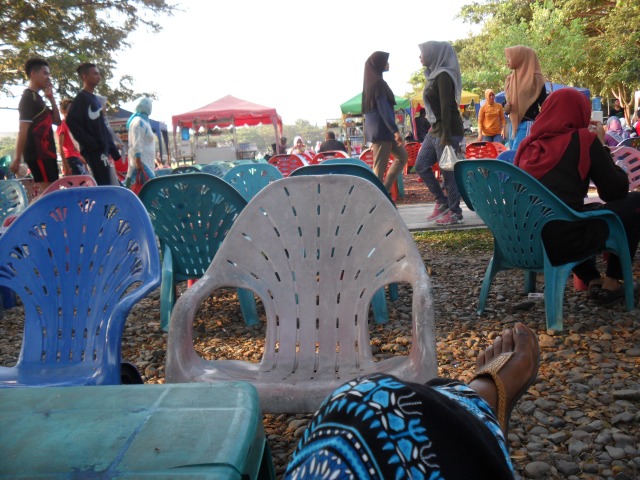 In Blang Padang park, where the locals go to exercise on Sunday mornings. The women are wearing exercise clothes…not an elbow or a knee to be seen.

If I see a woman minus a head scarf or wearing short or three-quarter sleeves, I know she’s not from here, except for the Chinese lady who owns the shop where we get our printer serviced.  But, see?  She’s not from here, she just owns a business in town.

Remember how I mentioned that I mistook a 10 year old in the first class I taught for a 6 year old because he was so small?  This was not an aberration – the people here are short.  In fact, everybody here is shorter than me.  Don’t mistake me…I didn’t say that the women are all shorter than me.  I said everybody is shorter than me, women and men.  The tallest man I’ve met is 1 of the local volunteers and I estimate that he’s about a half inch taller than me.  I’m possibly the tallest person in this country of 250 million…I’m just saying.

I can’t figure out the basis of Banda Aceh’s economy.  For example, it’s easy to see that tourism is the basis of the economy of Ocho Rios – the giant cruise ships in port, the numerous hotels and attractions, and actual tourists walking around the town are a dead giveaway.

For the life of me, I cannot work out what the economy of this town is built on.  There are food shops, carts and stalls aplenty, and a corner shop, well, on every corner.  As to how people earn money to go spend at the food stalls and corner shops, I cannot say.  I’m going to go out on a limb and say it’s probably government jobs but I can’t say what those jobs are, except maybe the military, the village chief (a.k.a., the captain of the neighbourhood watch), the immigration po-po and the secret service police (eyes…rolling!).

The island where Banda Aceh is located, Sumatra, is where much of Indonesia’s coffee comes from but I’m hard-pressed to demonstrate how the economy of this town is built on coffee.  I feel like I’m missing something so I’m keeping my eyes peeled to see if I can figure out what it is.

Although there is a general air of dilapidation about the town, I wouldn’t call it run down. There are abandoned buildings that were never rebuilt after the tsunami of 2004 but those are few and I don’t think that’s what gives the air of dilapidation.  I think it’s the lack of new construction.  Other than the refurbishment of the town’s biggest mosque, I don’t see any new building taking place.  Also, except for a few government offices, I don’t see any truly impressive buildings.  Every now and then as we’re zipping through a neighbourhood on the bike, I’ll see a nice house that’s probably considered impressive by local standards, but if I was to classify it, I would call it squarely middle-class and only impressive because of its location.

The roads are in pretty good condition but this makes sense when you consider the fact that the majority of vehicular traffic is motorbikes.  Potholes + motorbikes = disaster waiting to happen, so kudos to the townsfolk for keeping the roads in good repair for the motoring public.

So much for second impressions.  So far, nothing has stood out as particularly great about Banda Aceh.  I’m still waiting to be bowled over.  By now I’m pretty sure I’m waiting in vain.