Kilimanjaro Day 3 – Your Definition of Easy is Different from Mine

I was awoken on day 3 at 6 am, about an hour earlier than the agreed time.  This was because the mountain had unshrouded itself.  I could see it clearly for the first time since I’d landed in Tanzania and it was beautiful.  But so far away!  We still had 4 days of walking before we would be close enough to summit. 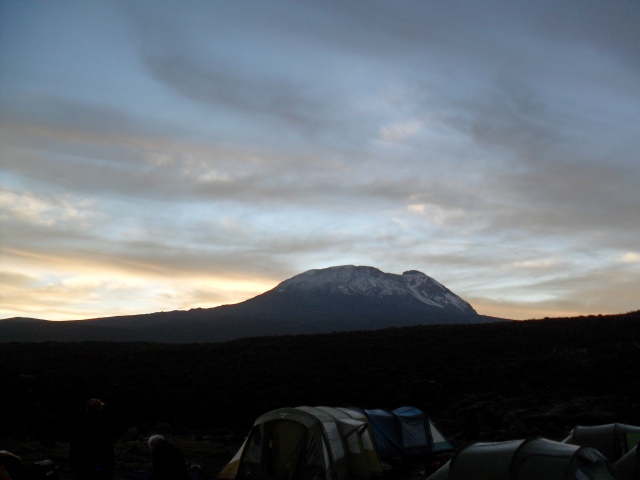 I huffed and puffed my way up the 150 m incline from camp to the highest point near to the camp, which was at 4,000 m.  We walked polepole and it took us about 40 minutes to get there and about 20 minutes to get back…and it was the hardest part of that day’s walk for me; I had to stop several times to catch my breath.  When we got back to camp, Milo and popcorn never tasted so good.

This wouldn’t be the last time I heard that a walk would be easy for me and it turned out to be anything but.  I finally understood that when Elly said it would be “easy”, he didn’t mean that it wouldn’t be challenging; he meant he knew that, based on his assessment of my attitude and my willingness to follow instructions, I could do it.  Once I understood this, I found, “Don’t worry, it’s easy,” to be quite encouraging.

You may have noticed from the statistics above that although the highest elevation we went to that day was 4,000 m, we actually slept at 3,850 m.  This is following an acclimatization principle of walking high and sleeping low.  It means that you allow your body to break through to a new elevation level during the day then you give your body a break and sleep at a lower elevation in order to give it a chance to normalise.  We did this every day except on summit day.

As I’ve mentioned before, the Diamox had me peeing non-stop but it was strange –  I wouldn’t need to go while we were on the day’s walk but as soon as we got to camp I would go at least once an hour.  Then when bedtime came, I’d zip up my tent tight and go to sleep without having to go to the bathroom during the night.  This was unusual for me because under normal circumstances, I go at least once during the night.  But, I had prayed on this too so I wasn’t too surprised.  Wandering around a camp full of strange people (mostly men) in the wilderness in the middle of the night to go use the bathroom isn’t a great idea.  You see why I had to pray on my bladder being strong?  I had to hold it all in for a good 10 hours every night.

I would now like to say a word in defense of African bush toilets.  Yes, out in the bush it’s basically a hut with a hole in the ground and people complain and act like they should have better amenities out there.  It’s the wilderness, people!  And don’t let’s all act like we never used our grandmother’s pit latrine back in the day.  Just saying, relax about the darn toilet facilities.

Day 3 ended as the previous 2 had done, with oxygen and heart rate measurements (still normal, yay!) and a brief outline of the next day’s journey, which promised to be quite long.  Somehow, Psalm 121 began to take on new meaning for me that evening.  Perhaps it was because I had started out the day finally seeing my target.  In any case, I personalised it and repeated it to myself at least once every day for the rest of my trek:

I will lift up mine eyes to the hills.  From whence cometh my help?  My help cometh from the Lord, who made heaven and earth.  He will not allow my foot to slip; He who keeps me will not slumber.  Behold, He who keeps me will neither slumber nor sleep.  The Lord is my keeper; the Lord is my shade upon my right hand.  The sun shall not smite me by day, nor the moon by night.  The Lord will protect me from all evil; He will keep my soul.  The Lord will guard my going out and my coming in, from this time forth and forever.  Amen.

I thanked God for what He had done so far on this trek, talked with Him about the next day’s journey and went to bed.